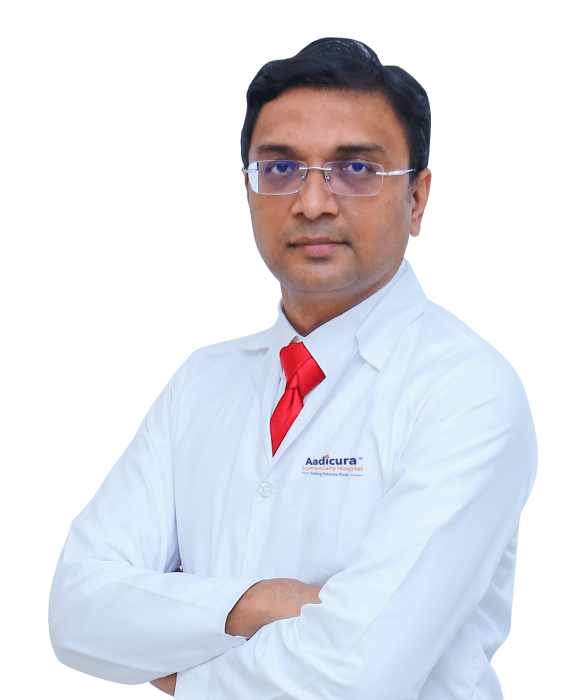 A Gold-Medalist in M.S (General Surgery), Dr. Sandip exhibits excellence as a Neurosurgeon & an Endovascular Neurosurgeon.

Dr. Sandip has pursued his interest in endovascular neurosurgery and completed his fellowship from Beaujon Hospital, Paris, France during 2014-2015. Beaujon hospital’s Neurointerventional department is one of the topmost departments all over the world. During his fellowship under the mentorship of Prof. Jacque Moret, he has learned the world’s latest hardware and software available for treating vascular diseases of the brain and spinal cord. During his fellowship, he has actively participated in many complex cases.

After returning from Paris, he has performed around 2000 neurosurgeries and around 200 endovascular neurosurgeries. His expertise is coiling/clipping of aneurysm, thrombectomy for acute ischemic stroke, AVM/AVF embolization, skull base surgery, and complex brain tumour surgery.

He has participated in various international drug trials during his general surgery residency.

He was awarded a gold medal for excellence in MS (General surgery).

He has several publications during his neurosurgery training.

He has presented a few papers at national conferences.

He is a life member of NSI (Neurological Society of India) and SNVI (Society of Neurovascular Intervention).

Over 9 years of experience

I am a strong believer of evidence-based medicine and multidisciplinary teamwork. Improving quality of life of my patients is my main goal. Compassion and empathy are the cornerstone of my approach.